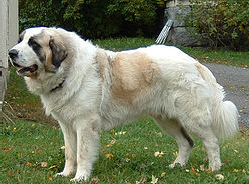 Utilization: Guard and defense. Previously, the Pyrenean Mastiff was used to protect from predators, in particular from wolves and bears. Today he is an excellent keeper and a guard for houses and their owners. Easily trained.

General Appearance: This dog is very large, above average height, has medium proportions, strong, muscular, harmoniously built and firm bone structure. Coat not exaggerated in length. Despite his size, he should not give the impression of a heavy or sluggish dog.

Behaviour / Temperament: Very friendly with humans. Calm, noble and very intelligent, at the same time courageous. Proud towards strangers from whom he never backs away. In its behaviour towards other dogs, he is good natured and aware of his superior strength. In need it  fights with great courage, thanks to its innate fighting skills — inherited from wolves — it’s distant combative ancestors. Differs by its low bark that comes from deep within his chest and its alive look in its eyes.

Head: Large, strong, moderately long. Length of skull in proportion to the bridge of its nose is 5 : 4. Longitudinal axes of the skull and muzzle are either slightly diverging or almost parallel. From above, the skull and muzzle must look long and even, the same shape. The width of the muzzle at the nose leather, must not differ from the muzzle’s width at the temple. From the side, the head must look deep but not bloated.

Tail: Set on medium high. Thick at root, strong and flexible. The coat on the tail is long, soft. In repose it hangs low and reaches easily to the hocks. The last third is always slightly curved. In movement and when the dog is alert, it is carried in sabre form with a definite hook at tip but without the entire length being bent or resting over the back.

Gait / Movement: Preferred movement is the trot which should be harmonious, strong and elegant. No tendency for legs to swing outward. No pacing.

Skin: Elastic, thick, pink in colour, with dark pigmented patches. All mucous membranes should be black.

Fur: Dense, thick and of moderate length. The ideal medium length, measured on the middle section of the topline, should be 6 — 9 cm. The coat is longer on the shoulders, neck, under belly, at the back of legs as well as on the tail. On the plume, the texture is not as harsh as elsewhere on the body. The coat should be harsh, not soft in texture.

Color: Basic colour white, always with a well defined mask. Sometimes there are irregularly distributed distinctly outlined patches of the same colour as the mask. Triple colour or solid color dogs are undesirable. Ears always spotted. Tip of the tail and lower parts of legs are always white. Mask should be clearly defined. It is an advantage if the outline of the patches is well defined. At the roots, the coat should be as light as possible, ideally really white. The most desired colours are, in order of preference, pure white (snow-white), patches medium grey, intensive golden yellow, brown, black, grey silver, light beige, sandy or marbled. Undesirable are red patches and yellowish-white basic colour.

Height: There is no upper height limit. When quality is equal, the bigger dog is always preferred. Lower limit : Dogs: 77 cm. Bitches: 72 cm. It is, however, desirable that all dogs should exceed the lower limit considerably. Dogs should be above 81 cm, bitches 75 cm.

Flaws / Defects: Any departure from the foregoing points should be considered a fault and the seriousness with which the fault should be regarded should be in exact proportion to its degree and its effect upon the health and welfare of the dog.

Dogs with explicit behaviour or physical anomalies must be unconditionally disqualified.