It turns out that the information on such a rare breed as the Pyrenean Mastiff you could find in our country far back in 1999. In “Friend” magazine (for dog lovers) there was an article published by Olga Mischihina about a Spanish Pyrenean Mastiff dog breed. The base for the article was information from Spanish magazine “El Mundo del Perro” 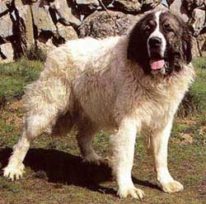 In the upper Aragon for about a few centuries the flocks of sheep were guarded by molosser-dogs, which are known in Spain as Mastin del Pirineo or Mostin. In present days, Pyrenean mastiff breed is considered a Royal community of dog breeding in Spain (RSCE) and FCI. In 1977 Pyrenean mastiffs of Spain Club was founded, as a branch of RSCE, which united breeders of this breed on its motherland and in other countries.

There is a quite public opinion that the ancient asian breed  tibetian mastiff (quoting Marco Polo “as tall as a donkey, as powerful as a lion”) — ancestor of all the modern Molossus.  However, some explorers suppose that already in neolite in Central Europe molosser-type dogs also existed.

For these dogs characteristics like tall height and large head with a wide cranial part, well-developed skeleton and powerful muscles are typical.  In the 3rd century BC in Molossia, a capital of an ancient nation Epirus, these dogs had already been acknowledged.  As remained images evidence, they resembled, more likely, modern english mastiffs, rather than tibetian dogs.

In Russian the word “mastiff” (мастиф) is borrowed from English. Consonant to it are also “mastin” and “mastino” from Spanish and Italian. They come from latin “mansuetinus, mansuetus”, which means “domesticated”. In the 4th century BC during the blossom of Mesopotamia, the dogs like mastiffs were used for military purposes.

Most probably, ancient mastiffs got to Spain together with Finn traders, possibly from Syria or India. In this case, one can propose an assumption about their relation with dogs from Tibet or Anatolia. At the same time in Europe there were forming other dogs with similar origin also: Hungarian Kuvasz, Italian maremma, Pyrenean mountain dog in France.

In the Pyrenean peninsula there are a lot of various natural landscapes, featuring incredible climate conditions. Possibly, this fact contributed to the occurrence of some related molosser-sheepdog like Spanish mastiff, rafeiro do Alentejo, kao da Serra da Estrela and pyrenean mastiff.

The main mission of all these dogs throughout many centuries have been protecting flocks of sheep from predators, including wolves and bears. Until now in Spanish museums you can witness the leashes with spikes, meant for sheepdog and protecting the vulnerable for wolf attacks throat during a fight with a predator.

Pyrenean mastiffs also were used for guarding the houses and properties, and military services as well.

It is known that the talking about separation of many breeds started around the end of 19th century, and about molosser breeds of Spain even later — from beginning of 20th century, meaning from time when the classical selection came in power. If in modern cynology in dog breeding we consider not only working qualities but also exterior features, then in the past the appearance of a dog was almost not taken into account: only its working abilities were important.

Specifically this fact was the reason for the enormous variety within-breed exterior differences, in particular, among mastiffs of Spain. Every breeder decided for themselves, what type of dog should be bred.

Pyrenean mastiff’s history is closely related with the history of Aragon kingdom, where, in fact, the breed formed. Modern mastiffs’ ancestors were dogs with lengthened coats, primarily white coloring.

What’s very important is that they were used specifically for guarding flocks of sheep in mountains and unlike other local (and not very) breeds, were never meant for hunting. In 1914-1915 Dr. Tutor wrote an article “Shepherd Dogs”, which says: “… Among different mastiffs, the most remarkable are pyreneans, which from a young age feature with power and strength…These mastiffs are very fierce, because they live in underpopulated mountain areas, where they do not see any people other than sheepmen. They obey them unquestioningly… These quite large shepherd dogs need quite a lot of dog food.

At the same moment, marquis de Montesa gave a definition for different types of mastiffs of the Pyrenean peninsula, which differ from each other by weight, height, and head structure. Author mentions Extremadura, Manchego, Navarro and Lion mastiffs. Mastiffs of Castile were also known.

Until mid 20th century diverse mastiffs of Spain were keeping many names. Although, Pyrenean mastiff was introduced as a separate breed way before the appearance of a standard: in 1890, at Madrid dog show 3 dogs were presented. And, finally, in 1946 first standard was confirmed for Spanish and pyrenean mastiffs.

Disappearance of wolves and economic difficulties in the country led to a drastic decrease in the numbers of large shepherd dogs: the direct need of them got lost. On separate farms there are individual specimens of pyrenean mastiffs, but the import of mountain pyrenean shepherd dogs from France was leading to even larger decrease in population of the original Spanish breed.

Pyrenean Mastiff, obviously, lost its protective qualities from wolves and bears, however remained an amazing guarding dog. In a countryside these dogs feel great, calmly lay in the yard during the day, observing what is happening around. However at nighttime they become cautious, sensitively react to a stranger approaching their entrusted territory. They remember all the workers in a household, considering them their property, that must be protected. These dog’s height and strength themselves inspire fear to unwelcome guests. In sheep-breeding farms many hold one or a couple pyrenean mastiffs. Dogs perfectly get along with animals, “raise” lambs, like gentle nannies. Funny to watch how a massive dog that weighs 80 kg is sleeping among sheep or carefully walking through the flock, without disturbing a single animal. For a sheep-breeder family pyrenean mastiff — a loyal friend and a guardian, that kept its valuable features to this day.

Expert’s opinions on the breed

Experienced breeders think that a basic pyrenean mastiff must be large and tall, dogs with withers’ height lower than standard lose typical look, inherent in the breed. It is very important to keep the colouring clean with spot distribution: highly undesirable “dirty” white background or with yellowness, extensive spots on the head and body (those are more suitable for senbernar, than for pyrenean mastiff). Fully white colour without spots is also inappropriate. Fur should not be too short nor too long, more soft rather. Coats play a big role in protecting a dog from injuries, bites and sun rays. Concerning the structure of limbs, you can imagine how harmful are either defects for dogs that weigh 80kg and 80 in height. Obviously, the lighter the dog, the easier it moves. Although the pyrenean mastiff is a relatively heavy dog, it is typical for it to have powerful and deliberate movements. Like for any other breed, checking on dysplasia is required.

In relation to dog’s personality, you rarely would meet an extensively aggressive one; keeping a mindful distance — is a sufficient precaution to avoid conflicts. Experts of breed claim that there are no difficulties in training a dog, many successfully pass a training camp in protect-guarding services and obedience. Guarding and sheepdog instincts in pyrenean mastiffs are congenital. So, for example, one sheepman was leaving the dogs for a few hours with flocks of sheep on the pasture. Meanwhile there were no attacks on people passing by, dogs were just protecting the animals, alarming those who came too close to the flock.

A grown up Pyrenean Mastiff does not require too much food. Diet depends on its  physical workload. Ability to adopt in dogs of this breed is high, they are tough, unpretentious and can adjust to any conditions. However, it is desired to consider the history and the target of the breed and not turn a pyrenean mastiff into a sofa dog.

Pyrenean mastiffs feature by their enviable health, therefore the difficulties with breedings usually do not happen. Bitch easily whelps by herself, puppies, as born weigh around 750g, which brings a drastic contrast to her own weight 60-70kg. Although, by 2 months old their weight reaches 15kg, meaning increasing it for such a short period of time by 20 times. That is why it is critically important to provide growing puppies with a balanced diet, to avoid disruptions in development. Youngsters require a sufficient amount of time spent outdoors.